Can Alzheimer’s Disease be Predicted at an Eye Exam? 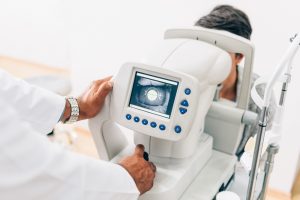 Did you know that you have a small area in the center of your retina that helps with your precise vision? A recent study found that this central zone in the retina was significantly larger in patients in the earlier stages of Alzheimer’s disease before they experienced symptoms.

The central nervous system and the retina are inextricably linked, and changes in the brain can often be detected in the eyes. Research shows that advanced Alzheimer’s disease has been linked to thinning of the central retina and degeneration of the optic nerve.

What is Alzheimer’s Disease?

Alzheimer’s disease affects 50 million people worldwide and is the most common form of dementia. For reasons that remain unknown, abnormal proteins begin to accumulate in the brain and interrupt central nervous system signals.

Protein deposits, known as plaque, can collect in the brain for up to 20 years before symptoms begin to appear. By the time Alzheimer’s disease is diagnosed, the plaque has already caused irreversible brain damage.

A team of researchers from Washington University School of Medicine used a technique called optical coherence tomography angiography (OCT-A) to analyze the thickness of retinal tissue and optic nerve fibers in 30 patients who had no symptoms of Alzheimer’s disease. OCT-A is an extension of optical coherence tomography (OCT) – one of the many standard tests you may receive at a comprehensive eye exam.

The patients then underwent traditional testing for Alzheimer’s disease including positron emission tomography (PET) scans and cerebrospinal fluid analyses. These tests showed that about half of the patients had elevated levels of proteins associated with Alzheimer’s disease. The research team found that the patients with elevated protein levels also exhibited significant thinning of the central retina.

The authors of the study are optimistic that routine eye exams could become an essential screening tool to determine who should pursue testing for Alzheimer’s disease. PET scans and cerebrospinal fluid analyses are invasive and expensive, so it is difficult to justify these tests in the absence of symptoms. If further studies confirm similar findings, eye exams would offer a cost-effective method to screen younger individuals to assess their risk for the disease.

In the future, when better treatments are available, early diagnosis of Alzheimer’s disease could open possibilities for earlier intervention to delay the progression of the disease. A comprehensive eye exam is much more than just a vision check-up. A full eye exam with dilation provides a window into your overall health, and the ability to predict Alzheimer’s disease may have just made that window a little larger.